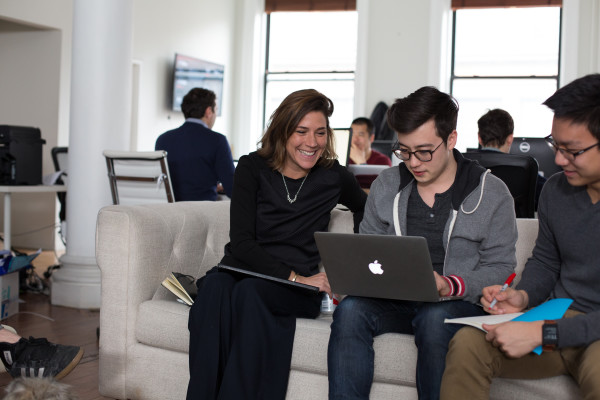 Just A Note: Camilla Velasquez on Coming in as Head of Product

Posted April 16, 2015 by Camilla Velasquez in Justworks Love
Camilla came on as Head of Product in December 2014. Here she talks about the experience of assuming that role and how she did it successfully.

When I first joined Etsy, we were putting together a team to build a new payment system for the marketplace. For 3 years the Payments team worked together very closely, quickly expanding in scope and size. The product needed to work flawlessly – there isn’t room for error when you’re handling people’s money. For that to happen, we had to build a cross-functional team that checked their egos - doing whatever it took to get the job done even if it wasn’t in their job description - and also generate a tremendous amount of trust amongst us.

Get the guide on how PEOs work for small businesses.

The months leading up to launch were some of the happiest of my career. Leaving Etsy, and the Payments team in particular, was a difficult decision, but I knew I wanted to recreate to that feeling of a close-knit team, working on high-stakes, complex, and valuable work.  That's where Justworks comes in.

Want to get to know more of the Justworks team? We spoke with Coral Edwards, our head of marketing, here.

Why I Joined Justworks

Joining Justworks was about 2 things:

Isaac Oates, Justworks’ founder, and I worked closely on the Payments team at Etsy, and I admired his leadership style. What’s most important to him for a team is “everyone in position” - everyone doing their part, with clear responsibilities, but respecting the work each person contributes to the greater goal.

Isaac’s view of “product” matches mine, which is to say that the entire end-to-end experience - everything from physical brand assets, application UI, performance, customer support, pricing, account management, vendor management, and operations - is what truly makes up a product. Product development isn’t just about your web app, it’s about building an identity.

What’s more, every person at the company has something to learn from the other, and no one person is more important than the overall team or our customers. Silos create not only inefficiencies, but barriers to empathy and trust.

The benefits, HR and payroll space is also tremendously complex and exciting. The product we build has the ability to power companies, but also make CEOs, CFOs, and COOs better at their jobs.

Coming In as Justworks' Product Lead

When I started working at Justworks, Isaac had been acting as both the head of Engineering and the head of Product, but knew it was time to bring in leaders for both those functions as the size of the company and customerbase continued growing quickly. Anyone joining a startup as the first “product person,” where the founder was previously acting in this capacity, knows this can be nerve-wracking. Amongst other anxieties that come with leaving a secure job for a startup, you have to grapple with how the team will handle a new leader. Will the transition be a smooth one? Of course, the second question is “of all the possible options, what should we work on?”

I knew, though, that the only way we could even begin to tackle the second question, was if we had a trusting and jelled team - so, managing that transition was critical.  We needed to loosen our reliance on our founder.

For that to happen, here are the three areas where I focused most heavily for my first six weeks.

With a few wins under our belt, and confidence that our team is starting to jell, it’s been easier to define our roadmap – and do so as a team. With communication, trust, and ownership, we have a solid foundation on which to continue to develop our product.