Setting the Stage for Hack Day

Peeling Bananas and Writing Anthems: Inside Hack Day at Justworks

When the Justworks team takes a break from building awesome tools for growing businesses and has a Hack Day, some pretty special projects take shape. Check out what we hacked this time. 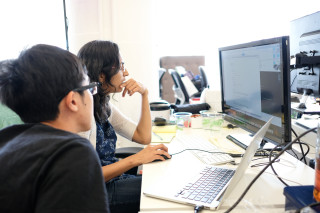 Every once in a while, the Justworks Product and Engineering (ProdEng) team takes a break from building awesome tools for growing businesses to showcase their creative sides, building whatever they can dream up in “hack” events. This past month, we had a 24-hour Hack Day where the team hacked on a ton of different things (some useful, some not so much).

Besides being an outlet for the team's creativity, hack days are a great chance to try out a new technology or area that you might not be familiar with (e.g. a backend engineer working on the frontend), so we encouraged people to work outside their comfort zone.

We also helped people to share ideas beforehand and form teams, especially with people they don't normally work with — a great chance to build bonds across teams. Lastly, we wanted everyone to have fun! There was no restriction on the scope of projects — outside-the-box thinking was encouraged.

Setting the Stage for Hack Day

This is the third time Justworks has set aside time from our regularly-scheduled work to "hack". In March 2016, we had a customer-focused "Surprise and Delight" hack week, and in May 2017 we had an open-ended Hack Day, where people could work on anything at all.

As we were planning this most recent one, we decided to also keep it open-ended again, since it had been so long and we wanted to give people time to tackle the projects they had been dreaming up in that time, no matter how crazy.

So we got a bunch of food and drinks — and swag, of course — and everyone hacked away in the office over the course of 24 hours. At the end, we invited the whole company to see demos of what everyone hacked on! Here are a few of the projects the team showed off:

By Viola, Nikki, and Rose

We sit in an open seating area, with no dividers to hang things on. With a growing team, there are new faces and people moving spaces fairly frequently. It’s difficult to know where a coworker’s desk is, if you need to drop something off or find them for a quick chat.

We wanted a simple name tag that displayed the employee’s name and photo, as well as a lightweight way to display it, since our desks are small, and space is mostly reserved for action figures and snacks. So we developed Just Tags! Double sided, they can be raised up and displayed off the side of your monitor, or you can make your own custom display stand. 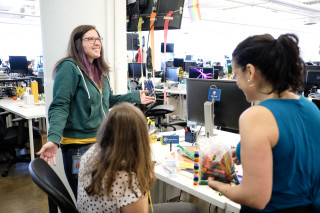 We have a web-based tool that our engineers use to deploy code to the site (and coordinate/monitor these pushes), called Skylab. But you have to be at your computer and logged in to see what's going on. Since this is such a critical thing we do, I thought it'd be nice to have a dedicated display in the office to show the deploy status. 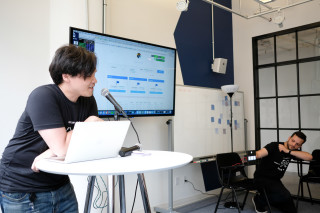 The results of our own JustBot were very silly ads that sounded kind of like Justworks ads — but a lot more ridiculous. Here was the best one: “We could be talking about tomatoes, you should be a business, every day can be your employees.” 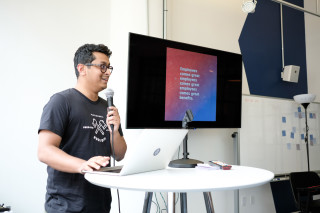 By Geoff, Joel, and Miranda

Justworks is a great place to be and we don’t really have a mascot (aside from Milo, our CEO’s dog) or a symbol of pride to rally around. That’s why we created the anthem! It’s a song that sums up why Justworks exists, reminds us of the purpose we serve, and all to a dope Brazilian-influenced beat. We know the song is funny but it is something we can all sing to and have fun with. 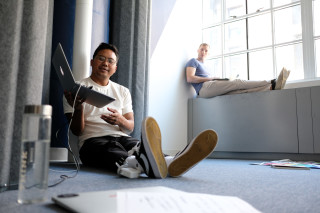 By Edwin and Reshmi

Slack is an important tool that the customers use to reach out. Speed of response goes a long way in customer satisfaction — to start with, acknowledge the customer and make them feel heard. So how do we make sure that our customers are getting their due attention in the midst of all the crazy, eyes-glued-to-the-screen moments?

This is where an idea came up from Jason Whitman (VP of Customer Success) to turn a light on in the Customer Success area when there is a message in the public Slack channel from a customer. We further extended idea to add an alert in the internal Customer Success slack channel. We named the project and the slack bot “Hermes”, because he is the messenger of gods in greek mythology. 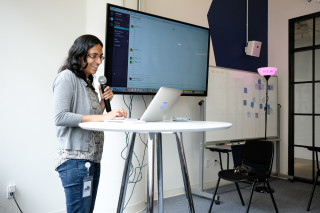 By Ashley and Justin Chu

Peeling a banana is fun, so we automated the joy (not really). We wanted to build an automatic banana peeler because it seemed like an interesting challenge. Neither of us are experts in building machines, but given this opportunity to hack for fun, we were eager to come up with a cost-effective one that peels bananas.

We wanted to imitate the way humans peel bananas – from top to bottom. After some research, we came up with a design that uses three clips on wires to pull down each side of the peel. We used some cardboard, an Arduino kit, and paper plates we found in the office, and we hot-glued them to build a prototype. It successfully peeled half of the banana we used to test with. Semi-automated. 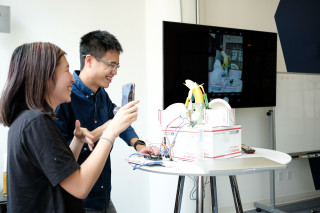