The Factors Behind Rising Healthcare Costs

What This Means for Small Business Owners

Why are Healthcare Costs Continuing to Rise?

Healthcare costs are on the rise, and individual Americans — and their employers — are continuing to pay the price. Who (or what) is to blame for this trend? 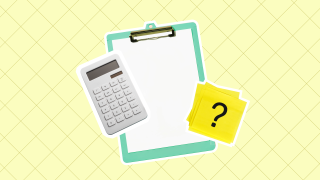 The high cost of healthcare in the United States today is a financial challenge that almost every American is familiar with. In fact, a recent survey found that around one in three Americans actually avoid medical care due to the high price tag that it comes attached to. Another study published by the Organization for Economic Cooperation and Development (OECD) reported that individuals in the US pay far more each year for healthcare than citizens of any other country (the average American pays around $10,586 each year, while the average resident of Switzerland — the country with the second highest healthcare costs per capita — pays around $7,317 annually).

Get educated before buying health insurance for your business.

These trends also apply to business owners, many of whom offer group health insurance plans to keep their employees covered. Data from 2019 suggests that employer healthcare costs — including premiums and out-of-pocket costs paid on behalf of employees — could increase by as much as 6% in 2020 (that’s an increase of $14,642 per employee in 2019 to $15,375 per employee in 2020). A recent survey from eHealth, furthermore, found that 80% of small business owners are worried about their ability to afford rising health insurance premiums for their employees.

It's an understandable concern. So let’s start by exploring why healthcare costs are rising in the first place.

The Factors Behind Rising Healthcare Costs

As the number of people in the US who require medical care increases, so too does the cost of healthcare services.

The steady rise of healthcare costs in the United States is driven by a wide variety of social, political, and economic factors. Those factors, like those that operate behind the scenes of any macroeconomic trend, are notoriously difficult to parse out and identify.

In November, 2017, the Journal of the American Medical Association (JAMA) published a study that identified three primary factors as the main drivers of climbing healthcare costs in the US: (1) Population growth, (2) population aging, and (3), changes in service price and intensity.

Let’s briefly break down each of those three factors to gain a clearer understanding of how they contribute to the big picture:

When it comes to health insurance premiums, increases can be influenced by several factors.

Let's take a closer look at that first expense, premiums — something most people with health insurance are very familiar with. When it comes to health insurance premiums, increases can be influenced by several factors, including:

Without diving too deeply into the nitty-gritty economic forces that are at play, the main thing to understand here is that the cost of these healthcare services (like any other product or service regulated by our economy) are subject to change over time. The Consumer Price Index, which tracks these fluctuations in the price of commodities, has shown that the growth in healthcare costs over the last twenty years has outpaced the growth of inflation: 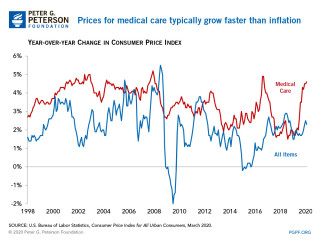 It’s not yet completely understood why healthcare service costs (like the ones listed above) are growing at such a disproportionately rapid rate. There are, however, a few possibilities. For example, innovations in healthcare technology, which have made it possible for patients to receive more effective treatments, could be producing a general increase in the cost of medical care. It’s also been suggested that the merging (and monopolization) of hospitals is increasingly enabling care providers to raise their prices.

What This Means for Small Business Owners

As we’ve already seen, the prognosis for the near future of healthcare costs in the United States is basically one of continued growth. Given current national policies and economic trends, it’s reasonable to expect that Americans in the future will be paying more for health services and insurance than they are currently. This appears to be true both for individuals enrolled and for employers who offer group health insurance plans.

Yes, predictions for the future of healthcare costs in the US can be a bit nerve wracking. And those predictions, furthermore, pose some very real challenges to small business owners. But those two statements added together do not necessarily spell the end for your employees’ healthcare coverage. They simply add up to a need for small business owners to rethink their group health insurance strategies, and to find plans that will be optimally suited to meet the constraints of their budgets, as well as the needs of their employees.

Granted, those are endeavors that many small business owners simply do not have the time, resources, or wherewithal to tackle on their own. Thankfully, they don’t have to. At Justworks, we can help you to research and find employer health insurance plans that will keep your employees (and their benefits) protected.