Discovering a grown-up payroll solution
Though CreativeMornings remains small, the number of people they work with has increased exponentially, and Justworks has been there to help them navigate this growth. 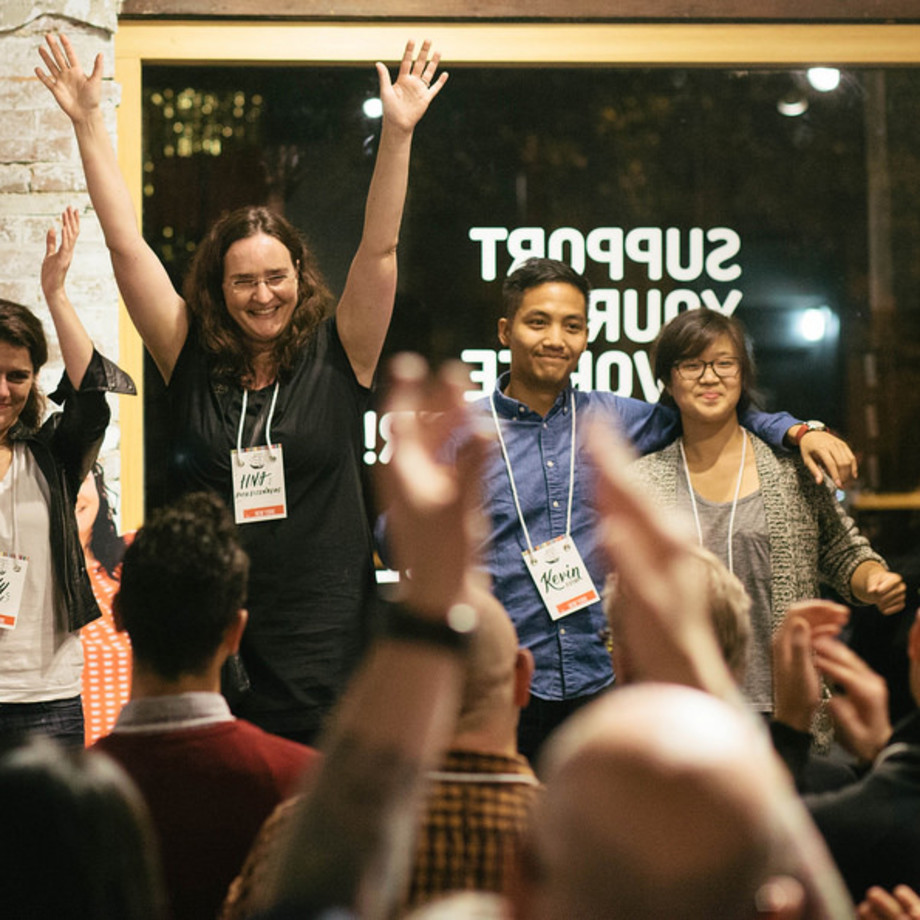 As CreativeMornings expanded their team, they realized it was time to ditch paper checks and “grow up” a bit. They also wanted to offer access to high-quality benefits.

Justworks handled their payroll needs with ease, allowing the team to seamlessly process employee payments and reimbursements — plus payments to their many vendors.

Full-time employees gained access to benefits through Justworks, and CreativeMornings was able to set up employer contributions within the easy-to-use platform.

CreativeMornings is a free lecture series launched in 2008 and centering on the creative community. The event has grown from a monthly gathering in Brooklyn to regular meetups in 100 cities around the globe. Those events are organized by over 500 volunteers, and the Brooklyn-based CreativeMornings HQ provides the necessary resources, support, and guidance to these members. Though their team and HQ remain small, the number of people that they work with has increased exponentially, and Justworks has been there to help them navigate this growth.

Before Justworks, CreativeMornings used a simplified payroll system. “We paid people with paper checks. We worked with an accountant regularly, to help us go through all of our transactions, make sure we sent out the appropriate 1099s, and chase up documents that we had forgotten to get from the various employees. It was a little bit more difficult before Justworks,” said Kevin Huynh, CreativeMornings' Chief Operating Officer.

He said that, while they knew there were better ways to deal with their financials, it was hard to carve out time to set it up. He explains, “Even if you know it’s good for you, you put it off. You know it takes a little bit of time to set up. Otherwise, you think to yourself: You know what? Maybe I can just get this payment out the door, and I’ll deal with it later. This year, it became time for us to actually deal with it.”

"This was honestly my first time setting up a business… Justworks was there to help me sort through it all."

We offer a simplified payroll process and effortless integrations, so you can make any payments you need to - at no extra cost.

Justworks is a modern, tech-forward platform that you and your team will love to use.

Explore our platform in this brief demo:

Learn more about our benefits and plans:

Getting Help to “Grow Up A Bit”

“When we hit the five-person team mark, we realized that we wanted to grow up a little bit, and we needed to move to a payroll system. We wanted to provide benefits for our employees, and we looked at various options that took care of both payroll and benefits. CreativeMornings is always interested in new and creative solutions, and solutions that fit better for our organization have a more grassroots feel to them, and Justworks felt that way, with real, helpful people walking me through what our options were."

"We recommend Justworks. I had a number of calls with the Justworks team, because, this was honestly my first time setting up a business, period. I had a lot to learn. I mean, I had to learn what payroll even means, what is deducted, what it means to provide benefits and how that breaks out, the differences between health and dental and vision, what can be covered, what an HRA is. Justworks was there to help me sort through it all.”

One of the most important parts for CreativeMornings was securing healthcare for their team, and Kevin was looking for real answers to confusing questions. “Justworks really helped us understand the landscape. So, for example, they explained not only that you can you provide health insurance, but also why some options cost more than others, what an appropriate setup is for an employee, how it all fits in with the new changes in U.S. healthcare, and even, why some things are really frustrating or expensive. I honestly asked all those questions to the team, and Justworks was patient and very informative. I learned a lot.”

“We set up Justworks to pay salaries to our small team, as well as payments to a number of contractors on a monthly basis. The key for us was to have a system that takes care of the 1099s and all of the necessary tax information for those contractors at the end of the year. We are fans of systems that are automated, smart, and electronic, and Justworks does all of that, with e-signatures for documents, and online I-9s. It’s all worked really well for us – there was no confusion when I got my employees started with Justworks. It was really straightforward. We do so much electronically in my company, so this was really easy and intuitive for them to get started.”

Kevin also shared how Justworks has helped them through a recent conference they organized. “CreativeMornings has hundreds of these volunteers worldwide, and recently, we brought 200 of them to New York City, to meet each other for the first time. We had representatives from Bogotá to Berlin, and during that time, our small team of five ballooned. When you include all the contractors, vendors, and sponsors, we were literally dealing with hundreds of people that had to make this event happen. If we were not set up with Justworks, the idea of getting all of those payments and employee reimbursements processed would have been incredibly difficult. We had all sorts of different agreements with different people as well: some were paid 50% upfront and 50% afterwards, some payments were reimbursements and others were compensation, and some were to full-time employees versus short-term employees. Justworks accommodated all of these payments easily.”

Kevin adds, “Honestly one of the most impressive things for me is how easy vendor payments are. I’ve been on the other side of this, where I was trying to get CreativeMornings paid for an event, and we had to get ourselves into the vendor system of another company. I’ve literally had some experiences where it takes many weeks to get that happening. So, jumping into Justworks, I was impressed with how easy it was to get vendors to sign up and enter their information. I’ve been able to process the payments of probably 100 vendors, with no issue. I send them the invitation, and then before I know it, I get the confirmation that they’re all set up, and I can go process the payments right away. I’ve been really happy with how Justworks has worked for us: the less I need to think about any of this, the better. Justworks is just the way to go for us.”

Walking us through how their team is structured, Kevin explained how they allocate time to take care of their team. “We are still operating with a small team. My job definitely isn’t centered around the billing, HR, and staffing aspects. My main responsibility is our strategic and corporate partnerships that we work with. I have been handling the HR and accounting pieces of the business, because we don’t have a CFO or HR department – it’s supposed to be only 5% to 10% my job. So on Thursdays, I usually boot up Justworks, alongside other software we use, like Freshbooks, to look at the invoices we’ve received and send out payments. We work with lots of different illustrators, for instance, with the different creative campaigns we do, so I schedule the appropriate payments. Occasionally, I’ll log in on days other than Thursdays, making any changes to compensation or benefits, adding people on, or any other pressing needs.”

Expanding on the philosophy of CreativeMornings, Kevin told us, “We, as a company, decided that benefits should become standard. Our full-time employees have health, vision, and dental benefits set up through Justworks. We were able to select the portions of health, vision, and dental insurance that the company would cover, straight from the online application. We’ve also been able to take advantage of Justworks’ transit benefits, so that our team can purchase unlimited New York City Metrocards pre-tax, which is awesome.”

He adds, “I think we came to the decision to offer these benefits as the team started to grow to around five people, and we realized that we really wanted to get all of these company functions all set up. I guess we were making a lot of these structural changes at the same time. We decided that if we were going to do this, we’d like to do it right the first time. We didn’t want to find ourselves in a situation where a couple months down the road, we have multiple disparate services we’re using, and that we’d need to transition off again in the near future. We were considering Justworks and [a competitor], side-by-side. The Justworks team were not pushy, and they answered all of our questions about the value and differences in cost. We chose Justworks, and we’ve been very happy.”