Overcoming the Fear of Building a Company

Creative Advertising: How We Executed a Memorable Halloween Ad Campaign

Justworks’ creative lead Adam Meisel talks about what it takes to create a subway ad campaign that leaves a lasting impression. 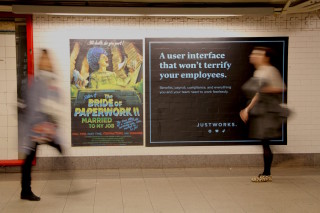 Let’s face it — being an entrepreneur is scary. All the tax laws, compliance, and liabilities entrepreneurs have to worry about is enough to send a chill down the spine of even the bravest business owner.

Overcoming the Fear of Building a Company

Justworks understands all the fear that goes along with building a company. As an entrepreneur, our CEO Isaac Oates founded Justworks because he understood firsthand the everyday difficulties business owners face — from the pressure to keep up with a continually changing landscape of labor laws to the mountains of tedious administration required to grow a team.

Justworks created our newest advertising campaign to bring some humor to those realities, and find a genuine way to connect with fellow entrepreneurs who are looking for a better solution. Throughout the month of October, the spooky campaign has run in New York City subway cars and lined the walls of Union Square station. The look? Pairing old-timey horror movie images with modern-day taglines about entrepreneurial fears. We sat down with Justworks’ creative lead Adam Meisel to discuss how he worked with our creative agency Circus Maximus to build a successful marketing campaign that resonates with a large audience.

What’s your position at Justworks?

I’m the creative lead. I run the design team, which tends to cover two major areas — product design and also marketing. One of the things we’re trying to do internally is help other departments be as creative as possible in terms of the design process.

How long have you been working in partnership with the creative team with Circus Maximus?

We brought them on a little over a year ago. We vetted a lot of different agencies, some of them big and well known. But bringing [Circus Maximus] on was particularly interesting. They were small and really focused on collaborating. They wanted to get into the nitty gritty of what we did, instead of just putting a shiny veneer on it. What kind of nitty gritty do you mean?

What Justworks does is pretty complicated. Showing that we’re knowledgeable and trustworthy and explaining that in an interesting and short way on a subway is a very hard task. So Circus Maximus learning the industry with us through demos, sales calls, and research really allowed them to get a sense of what we do that goes beyond HR and payroll. Those short pithy subway lines connect with people — they know we’re knowledgeable and understand the actual hardships they’re going through.

Where did the idea come from for this particular campaign?

You know how they say there are never any overnight successes? This didn’t come out of nowhere. We knew October was a big time of year because everyone [employers and their respective employees] was renewing their healthcare plans. And early on last year while working on a campaign with Circus Maximus, we had an idea of coming up with silly halloween costumes, because this is such a scary time of the year for entrepreneurs.

The costumes were cute, but we didn’t necessarily have the budget or the timing to really blow that out of the water. So we sent them to a couple customers and the response was overwhelming. People don’t expect an HR or payroll company to connect and have fun with them. We knew we were onto something there.

They wanted to get into the nitty gritty of what we did, instead of just putting a shiny veneer on it.

We started much earlier this year to prepare for this season and returned to the Halloween-themed idea. What if we did it bigger? What if we took the Halloween costumes as the seed — that everyday of the year is the spookiest time for an entrepreneur — and try to blow that out?

The idea of horror movie posters came up and that was something that resonated with the whole team. Normally, we like to explore all the options and vote, but we just ran with that immediately. We knew this was an idea Circus Maximus could knock out of the park.

Were there any particular old movies or images that you found especially inspiring?

We didn’t want to necessarily reference a specific movie. We liked tropes — classics like Frankenstein, Wolfman, stuff with tentacles and extraterrestrials that are cheesily made up and give the pulp vibe from the 50s and 60s. Justworks has stuck mostly to bold text on a plain background for its subway campaigns. This evolves the brand into more complex artwork. Where do you see it going from here?

I had a conversation with another designer at an event recently where we talked about the simple aesthetic everyone is doing now. It’s kind of overtaken the subway; you see half the trains have these colors and bold text. That’s good because it’s visually less frustrating and noisy, but we want to continue to innovate.

One of the ways we’ve been doing that is by using intense blocks of text, like old school magazine eras in the 60s. It’s been really effective because you have a captive audience on the subway and if people are vaguely interested, they’ll read it on their commute.

Taking that part of inspiration, we’re able to come up with all these detailed illustrations with easter eggs in the copy to look at what we do. You can see hints of what kinds of paperwork we do and notes around all the different types. In the future, we’re still going to stay on the simple side. But we know we can add a lot of dense information that people can get into.

Justworks’ slogan is to “work fearlessly.” What does that phrase mean to you?

The goal of the design team is to simplify complexity. How do we make it so Justworks members can work in a way that they’re not fearful of things they don’t know about? We expose everything customers need to know in a way they can understand and make decisions against, or we let them know it’s already taken care of. Our work is all about enabling our customers to work fearlessly.

What was your biggest fear about running the Halloween campaign?

I had some worries about the level of cheesiness. But it’s known cheesiness, it’s purposeful. It’s an old school pulpy idea, so I’d be surprised if people didn’t get the joke. But overall, it’s resonated well with everyone. The illustrators did an incredible job.

Trusting Circus Maximus was a key component to this campaign. It took a while to get to a level of trust amongst ourselves in whose taste and opinions we could trust. Working with Circus for over a year, we learned that’s something we can very much trust with them. I’m really happy we have that relationship. Interested in learning about other past Justworks ad campaigns? We also interviewed Ryan Kushner, CEO of Circus Maximus.