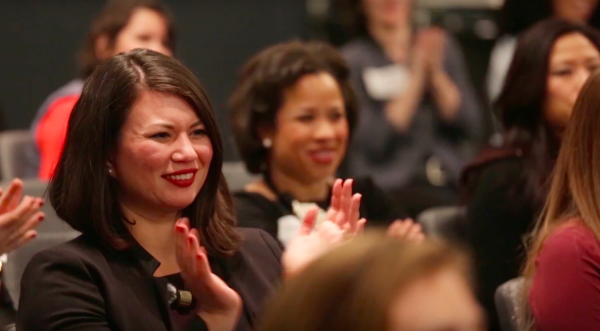 Posted March 30, 2017 by Kristin Hoppe in Justworks Love
Being a successful woman in business comes with great challenges and great rewards. Here’s how Justwomen creates a community of support.

For the past three years, Justwomen — a networking event for successful women entrepreneurs — has brought together ambitious people of various backgrounds. The event acts as a safe space for women to discuss their unique challenges and accomplishments in the workplace.

The inaugural Justwomen took place in Manhattan in November of 2014. Since then, Justworks has hosted a total of eight events with 17 speakers and approximately 800 attendees. And this past month, we proudly launched Justwomen in Washington, D.C. as well.

The quarterly event accomplishes a number of important goals:

Networking is a key to success, and Justwomen helps bring businesswomen together who share a similar vision. Elizabeth Galbut, Justwomen speaker and founding partner of SoGal Ventures, emphasized how networking propelled her towards her goals. “Networking is extremely important...The more you attend events and talk to people about the idea of what you want to do, the easier it will be to achieve that.”

Since its conception, Justwomen has given up-and-comers the opportunity to get real advice from women who have been there. As Shana Glenzer, CMO of MakeOffices put it when reflecting on her career, “[My career path] didn’t always seem like a straight line and I tried to embrace it as much as I could, but I would have tried to get plugged into communities earlier.”

Broaching the topic of gender in the workplace can feel fraught, and sometimes complicated. And with each Justwomen speaker, we’ve heard a spectrum of opinions on how it should be approached and discussed. Regardless of opinion, the ability to speak about it in a safe and supportive space helps women in business determine the path forward.

Want to sign up for the next Justwomen event in NYC or Washington, D.C.? You can do so here.

Dale: “It’s a really important time right now to be having conversations about entrepreneurship and women, and particularly, impacts and values...a really right time to supercharge woman entrepreneurship.

Shana: “So an event series like Justwomen is important in today’s landscape because there are so many women that are looking for resources to launch their next business, to move to the next level of success in their career, whatever that might be.”

Ximena: “I think events of this kind allows for all of us to know where to go for mentorship and different things with each other. When we share our personal stories, we inspire others — to connect with each other but also to find a community of learning and camaraderie that not often you find in the workplace.”

Dale: “I think it’s really important to hold these kinds of events here in D.C. to really build that ecosystem.”

Shana: “It didn’t really feel like a straight line and I tried to embrace it as much as I could, but I would have tried to get plugged into communities earlier.”

Ximena: “Changing careers for women is very difficult, especially when women have families, and I think we need to start telling people that that is okay. You know things, you can transfer them.”

Dale: “Be very very, determined and not give up. Perseverance at the end of the day that will help you break through an idea...so much is the brilliance as the perseverance.”